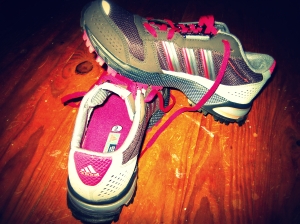 I just bought me some fancy new runnin’ shoes!

I didn’t want to advertise this until I felt like it might be physically possible, but I’ve been training for my first full marathon. I’m in week 7 of 16. Almost half way done until the 26.2 miles of stupidity.

Marathons. People do them all of the time. All over the world. So, who cares?

I run. Yeah, but I’ve done a couple of half marathons (13.1 miles) and some small guys (5K). I don’t even particularly enjoy running all that much. I do, however, enjoy marathons.

Here’s the Bill Nye the Science Guy part of it all…(which seriously blows my 25-year-old mind).

So you’ve got this stuff stored up in your muscles called Glycogen. Glycogen is the primary storage form of carbohydrates in the body, and the amount of glycogen the body can store is limited. And by limited, they say that in a typical person, there is enough glycogen present to fuel about two to three hours of moderate exercise. When glycogen stores get low or run out, the runner “hits the wall.” Basically you shouldn’t, technically, scientifically be able to keep moving. Training helps build up these glycogen stores. But basically the last handful of marathon mileage is pure mental willpower.

Willpower. I know a little something about that (that’d there be my Vow reference).

It helps that I’m training with a friend I work with. She and I keep each other in check. She’s has two awesome girls and a hubby (aka a real life), so I really have no excuses. Although I feel the need to make it clear that she’s kind of badass and a lot more athletic than me.

I run to run marathons. They are inspirational. 1,000s of people. Lined up ready to go. Blind people, people in wheel chairs, old people, young people. People. All going for the same incredible goal of endurance. And the Memorial Marathon is May 1. We run in remembrance.

And (of course, along with remembrance) this year, I’m running for me. Completely for me. 2 years ago I ran a 7.6 mile leg of a relay and vomited blue Gatorade afterwards (in OKC on Broadway) because Parker and I had just broken up two weeks before and I couldn’t bring myself to eat so the Gatorade on a 2+ day empty stomach didn’t work out so well. Last year I was dating MF, and he came out to cheer me on, which was one of the most giving things he did in our ship of relations. That whole dealio didn’t work out so well. So, this year, with HOT shoes in tow, I will be running to run. Fully trained. Fully full. Fully me and the pavement and the pain. And the accomplishment.

So put on your shoes, and try a 5K or a 5-person relay. Maybe this 25swf will be running next to you on May 1…you just never know… 😉

With a pep in my step ‘cuz I have pretty new shoes,