The sickness has been going around. It leaves no stone unturned, no head unclogged. It’s a real doozy and for some reason I’m still not over it, but almost there. In the throws of awfulness I left work early last week and came home to a made bed (my ultimate favorite) and this…

a pillow note from Mr. M.

It wasn’t all pillow talk during my week of a compromised immune system. Mr. M and I had to have a real heart to heart about how I need someone to take care of me when I’m sick. Normally I’m all I-am-woman-hear-me-roar, but when I’m sick–all caution is thrown to the wind and I become a big baby. Just scoop me up because I’ve fallen and I can’t get up. It was a good opportunity for him to learn something about me. He felt bad after not living up to my previously un-relayed expectations and came home the other day and said he had been thinking. He decided that writing a manifesto to protest his desire and commitment to taking care of me was in order.

The L-word crept into my mind as he mentioned the manifesto. Who are you? Why do I get to keep you? After 2010, the year of heartache and angst, it’s really unbelievable that I made it out alive and then there was this guy.

Mr. M. Nobody is perfect. But I wasn’t looking for perfect anyways. I was looking for this guy.

The one year ago today business.

I’m an extremely reflective person (stating the obvious) and I probably think too much (Facebook doesn’t help), but sometimes when I think about one year ago today I am just utterly amazed.

One year ago on September 2 I broke up with The Unmentionable One (stated with a low, raspy, silly voice), bought a car, moved out of said person’s apartment, and felt like the loneliest person in the world.

Now I’m in disbelief that it was one year ago that all this happened. It feels like three years.

I met someone (Mr. M) in March who made me realize that the world was a beautiful place, and dreams can come true…Disney style. Being so far on each of these spectrum’s in the same year is both refreshing and terrifying. One of the reasons I don’t like to write about happiness is I’m afraid I will lose it. If I acknowledge it, how long before it recognizes that I recognize it and it flees? Completely convoluted, I know. But these are my thoughts.

And speaking of thoughts. Last week I started thinking that if Mr. M didn’t ask me to be his girlfriend by the end of the month I was going to ask him to be my boyfriend. We have been acting like boyfriend/girlfriend for a while now, but we both agreed we wanted to take things slow. But lately I was feeling anxious and I had been asked out a couple of times (which is awkward). So, my plan was to buy some flowers and make a card that read… 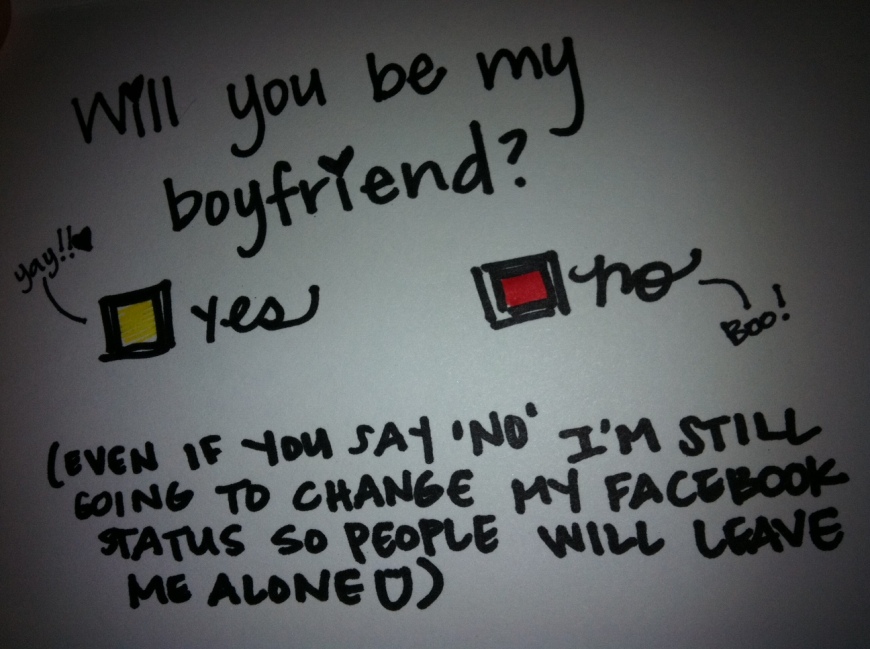 But I didn’t have to.

This Friday, September 2 morning Mr. M and I woke up like a normal day. Normal except for the fact that when he was hugging me before we left for our days he asked me to be his girlfriend.

And I said yes.

Yours on a cloud they call nine,

(This post is part of an awesome series of awesome 25swf guest bloggers- read about them here!)

I am so far removed from relationships right now, that it’s not even funny, it’s hilarious.  Everything in my life right now is one big-ass question mark.  I have like, zero time to dwell on the fact that I am single, and I’m okay with that.  Things have been rather stressful.  Some of it is good, healthy stress.  The other half, is kind of not as good and healthy.  I was and have been feeling very tense.  So, when I came across a groupon deal to get an hour massage for $30 bucks, I jumped on it!

It has been two years since my last massage.  It has been… hmm… man, how long has it been?!?!  Well, it’s been quite a while since I’ve had some good old fashion, hot-n-heavy action going on as well.  So, it’s no wonder why the massage I got last Friday rocked my world.  It was the best massage EVER!!!  I mean really, it was!  I’ve had my fair share of massages and well, let’s just say that this massage chick worked my muscles like no other massage chick or dude has ever worked my muscles before.  As I lay on that table, screaming and moaning in my head, I wondered if this massage felt so damn good because it has just been too damn long!  That may be the case.  Talking to a friend of mine who had recently gotten a massage, I asked her if there was a such thing as a bad massage.  She said something rather interesting, “it can’t be too bad when you have someone rubbing on ya!”  So, yeah, I’m feigning for another massage, which I just may indulge myself next month, and get another.  I don’t care if I can’t really afford it!  Or maybe, I should just put myself back in the game and bask in the power of touch…

Right now, they both sound good to me.  Okay, time to get back to work!

Like Loading...
After an amazing friend Facebook stalked MF (without me even asking) and found out that he is in fact STILL in a relationship. I drafted my response and sent it back with confidence that I had made the right decision.

I don’t hate you. There was a lot of pain that you caused me, and I appreciate your apology. I’m moving on and I’m so happy to be where I am in my life. Things are wonderful, and they worked out the way they were supposed to. I truly believe that.

I find it disrespectful to your new relationship and your new girlfriend to meet with you. It always hurt me when you met with (his ex’s name), and I don’t want to be a part of someone else’s cause of pain or anxiety.

It would be great if we could be friends, but given our history, I think it’s best for both of us to just move on.

I hope you are happy. I wish you the very best.

And thus, I opened some kind of new door. A door that closes the room behind me where MF lives.

Yours stepping in the right direction,

15 things I love about being single:

1- I can turn the heat up at night and fall asleep warm. Every guy it’s seems I’ve dated loves the fan blaring at 150mph. My head gets cold!

2- I don’t have to close the bathroom door

3- I can turn on ALL of the lights in the morning, and listen to my Pandora (I can even blare it if I so wish)